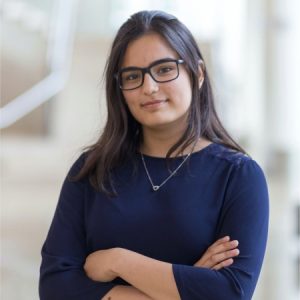 Ananya Chadha is a 16 year-old blockchain developer from Toronto. She has developed two cryptocurrencies and crowdsale (ICO) smart contracts with the ERC20 tokens framework set by Ethereum. She also won the Cryptochicks Hackathon, with her project putting Genomic data on the blockchain.

Currently, she’s focused on the intersection between blockchain and other exponential technologies including Brain-Computer Interfaces (BCIs). She is the youngest BCI developer in the world. Recently, she developed a brain-computer interface that uses brain waves to turn on and off music with the user’s thoughts, and controlled a remote control car with her brain. She is now sponsored by Microsoft for BCI development. Her mentors and advisors represent some of the leading companies in the blockchain and emerging tech industries. http://www.ananyac.com/